The ‘South Pole Traverse’ is a tractor-train convoy that hauls fuel across Antarctica, from McMurdo to the South Pole Station.  Below are my photos and journal entries of that venture. 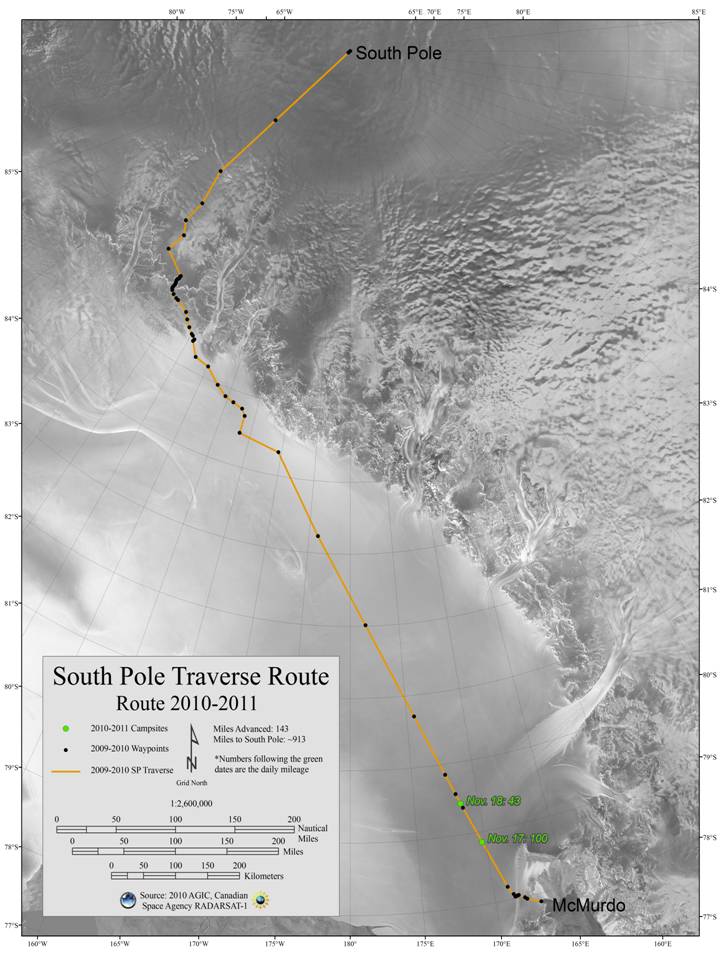 We picked the Reefer off the sled with a giant crane and put it back on its skis- yeah.  This took a while and when all was said and done we could not find the pins needed to hold it in place.  Had they been misplaced? Stolen?  Or was this something more sinister, like sabotage’.  Could this be the end of the Terry Billings Era?  After pointing fingers for a bit, we did what any good Traverser would do- we stole them from someone else’s sled.  Side Note: The Reefer Unit with all our food weighs about 20,000lbs.  The skis that the Reefer Unit travels on weighs about 20,000lbs. And our food weighs about 1,500lbs. End Note.

Also, we accidently punctured one of our urine barrels.  It seeped reddish-brown pissicles out the side of the drum and onto the sea-ice.  I thought it was an oil stain at first and when I went to shovel it up and then noticed it was rotting urine- I nearly vomited.

Upon getting in to town, McLovin’ went straight to the store and bought three packs of Marlboro cigarettes- his store limit for the day.  He then stood in front of the store and tried to get strangers to buy more cigarettes for him.  I found this amusing since McLovin’ vowed to quit cigarettes as soon as we left for the Traverse.  I bought him two packs, mostly out of pity, the third I kept for myself in case I need to bribe him or something.  McLovin’ is easily manipulated.

100 miles today in the CORRECT direction!  Nice.  It’s rare in the Traversing world to hit the 100 mile mark but we had light loads and a good trail.  The cab was extremely hot and I drove with the door open most of the time.

I finished one of my audiobooks already- dang.  I only have a few audiobooks and I’m trying to spread them out over what could be a 3 month long traverse.  It was the new Jon Krakauer book- Where Men Win Glory- pretty good, I would recommend it.  At one point in the book Pat Tillman writes about joining the military, he describes in great detail about missing home and his beloved wife. Tears started building in my eyes and I had to snap myself out of it, “DAVE! You’re only 100 miles from McMurdo, you are NOT going to start crying for god sakes?!”

We rounded the steep cliffs of Minna Bluff and are now heading out onto the Ross Ice Shelf proper. At 11:00am we met back up with our cached fuel bladders and other supplies. Surprisingly nothing was buried but someone had left the door open on the Piston Bully. It was just swinging there wide open. Usually when you make that mistake in the Antarctic the winds will pack the vehicle to the brim with snow, or worse, will rip off your door. But we got lucky.

Did my first load of laundry today, it’s a bit early for laundry, I know, but forgot to do it in town. Our machine washes AND dries-it’s pretty cool but slow as hell. Just got to make sure you keep the snowmelter full- god forbid you run out of water.

Had fishsticks for dinner tonight. Not bad, but we couldn’t remember how Robshaw had made that delicious tartar sauce last year.

“I think he added pickles?”

“Yea, OK, where would you hide a pickle around here?”

“Robshaw did, I think, and it was good, really good! I mean, pickles bring out the flavor in the fishstick. Ask Rob, he’ll tell you.”