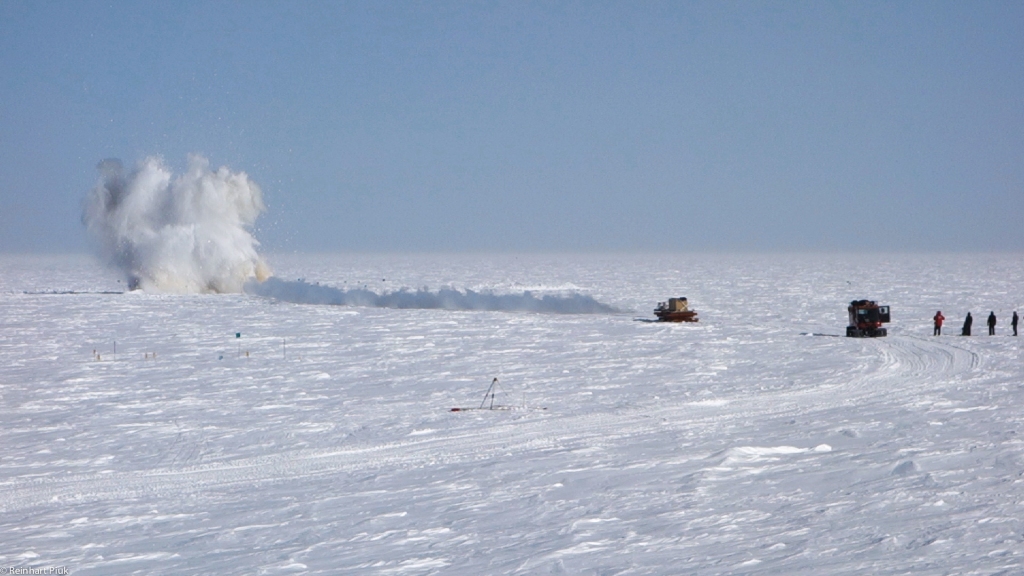 We’ve been at Pole for 10 days now. The fuel is offloaded and our parts are here. We will probably be on the trail again Sunday.

Recently we’ve been helping the Polies locate the Old South Pole Station with our radar and hot water drill. The Old Station is completely buried and has become a hazard to those working in the area. Our friend and fellow traverser ‘Storm’ was grooming the area near Spud Telescope with a Cat tractor and fell through one of the old buildings and plummeted about 15 feet down into the ice. He could have easily been killed. The NSF has decided to destroy these undersnow buildings so this accident doesn’t happen again.

The following photos are courtesy of Philip K. Swartz Jr. M.D. who served as Officer in Charge, South Pole Station, during the U.S Navy’s Operation Deepfreeze 1960-1961.

During the summer months (late 1960, early 1961) there were a variety of additional personnel at the station. There was a several-man contingent from IndMan 14 (civilians from an industrial arm of the Navy, based in Hawaii) to erect a new communications building and install a large number and variety of radio receivers and transmitters. Additionally, Dr. Carl Hamner (UCLA) and a small crew brought hamsters, cockroaches, and bean plants to the station to investigate the possibility that these organisms timed their diurnal activities by sensing the rotation of the earth. By placing cages etc. on rotating platforms, the spin of the earth could be exactly countered or doubled. 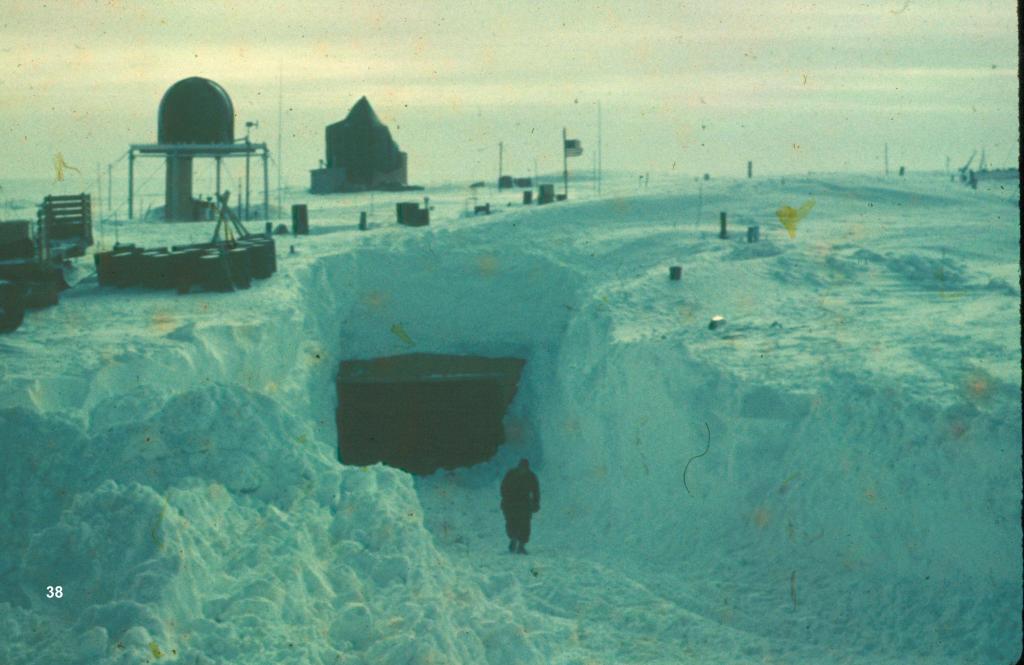 The station was built on the surface of the snow in 1957 but was soon buried under drifts. Over the years the snow accumulated and its tremendous weight would become a problem.

The roof beginning to buckle under the enormous weight. The black cables were main power and alarm systems. 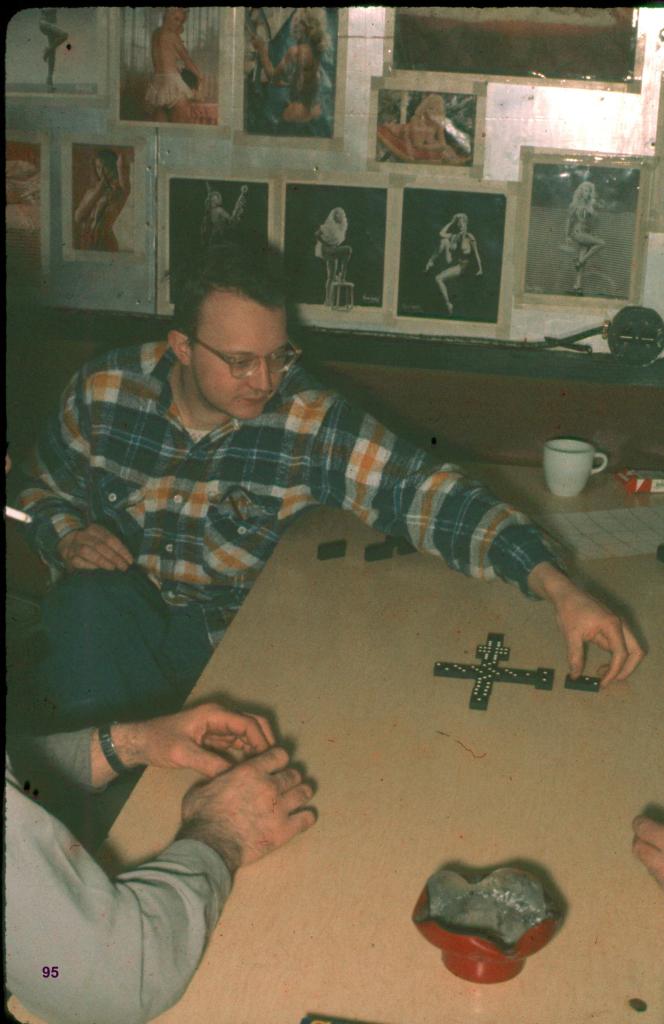 Ron Witalis, U.S. Weather Bureau. Notice the pin up girls on the wall. 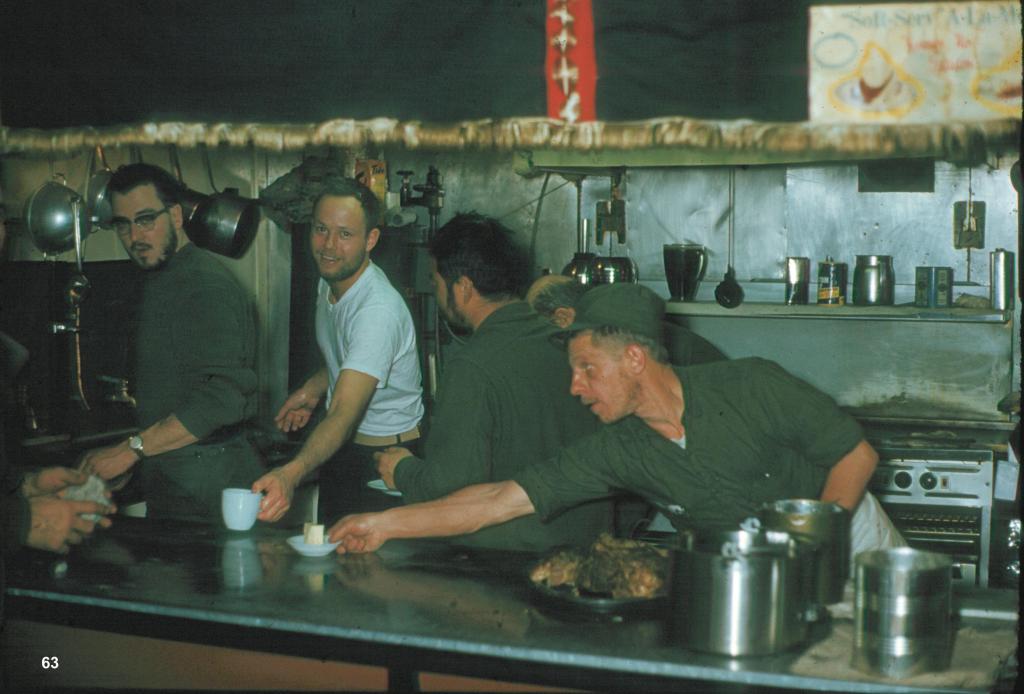 One of the support tasks of the Navy crew was to provide food, but
everyone (station personnel and visitors alike) were expected to share in
the mess cook detail. Left to right are BU1 (Builder First Class)
Palazewski, next a member of the summer scientific crew, then Jim Burnham
(wintering over member scientific crew), CMH3 (Construction Mechanic Third
Class) Jose Gomez (with back to camera), & CS1 (Commissary man First Class)
Charlie Wegner (cook). There had been concerns voiced over having minorities at these small isolated
stations. Previously they had been all white. In 1960 Jose Gomez was sent to Pole,
and an African-American was sent to Byrd. The program has been fully integrated since. 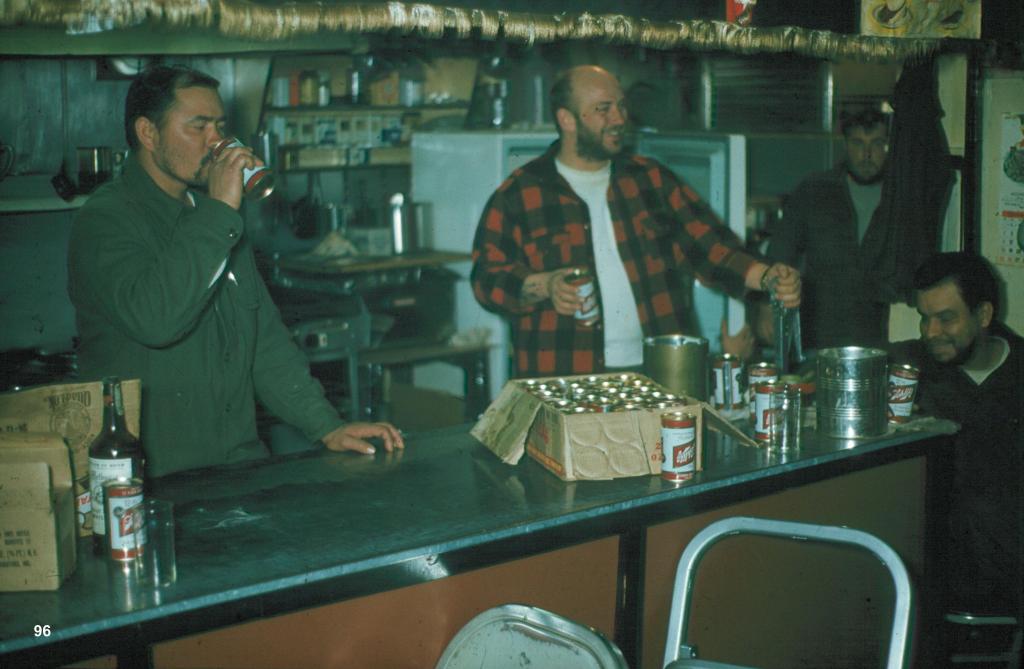 Happy Hour was held once a week, with a case of beer. The beer was stored in one of the ice tunnels and was frozen. It had to be thawed for a couple of days before use. Whiskey was US Navy issue brand “Old Methuselah” 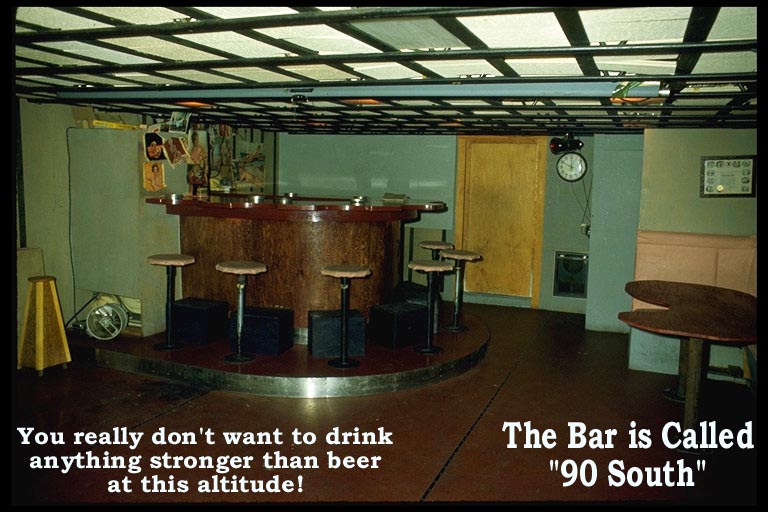 There was only one episode of drunkenness during the entire year, when one of the wintering-over crew received word his fiancé had just married someone else.

Sick bay area medical office. Storage room in the background. Until this was built, all the supplies had been in the tunnel areas and not inventoried. There were enough death certificates to issue one to everybody coming to the station for the next 20 years. The only antibiotic available was oral penicillin G that had outdated 5 years before the station had even been built! There were over 100 doses of morphine.

Flag raising at Siple’s (South) Pole winter ’61. Taken from a B&W photograph. Team had started to head to Siple’s Pole on a sled hauled by a D4, but the tractor stalled and would need re-heating to start, so they ended up walking out to the pole. Very cold (possibly -80f). Most cameras were frozen by the time they arrived there, and this is the only surviving picture.

Old Pole was completely abandoned by 1975.