When I was 21, my friend Zach and I turned our backs on civilization and headed blindly into the wilds of arctic Alaska. Our objective was to pull a canoe a hundred miles up the Alatna River, build a cabin, and live there for an entire year. When we stumbled into the village of Kobuk just three months later, we were unrecognizable from the two young men that began the venture. We resembled refugees from some horrific prison-camp. Our eyes were set back into our skulls accentuating our cheek bones which protruded unnaturally. Hidden underneath our jackets, every rib in our chests was well defined and clearly visible. My beard was long, unkempt, and bleached blond by the sun. We had been eating rodents (beavers and porcupines) to sustain us and it hadn’t worked. What we’d envisioned as a year-long vacation ended up being a struggle for existence. The wilderness, although beautiful, had been whole-heartedly unforgiving and she had given us everything we deserved and more.

At the time, I thought I knew my sh*t. I’d lived in bush Alaska and learned how to hunt, fish, trap, tan hides, cook over an open fire- the very basics.  I know now that the two young men that ventured into the wilderness were profoundly unprepared and were lucky to escape with their lives.

I’ve always kept the story of that adventure close to my heart and I won’t go into it here, what I will say is the experience has left me with a lifelong fascination with primitive living and general subsistence.

When I heard a friend of mine had bought a plot of land in central Alaska and intended to use it as a place to practice primitive living skills- I jumped at the opportunity to visit. In fact, I invited myself.

I actually had the arrogance to think I might teach these guys a few things about living off the land. What I found is that I still have a few things to learn myself.

Case in point; primitive fire making. I have never been able to achieve fire by rubbing two sticks together but these guys have it down pat. In fact, they refuse to use matches or lighters and can produce flame in less than two minutes with a bow-drill. I was thoroughly impressed.

Above: Glenn uses a bow-drill to make fire.

Below: The resulting ember. 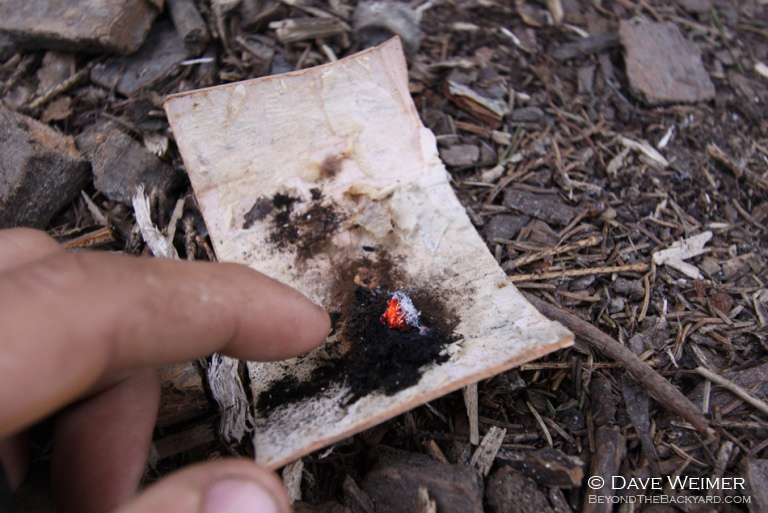 Most of their food is coming from the land- the staple in summer is chum salmon. They use manufactured gill nets to catch them but I won’t be surprised if next year they make their own out of sinew or moose rawhide. They preserve salmon for future consumption by drying it on fish racks. 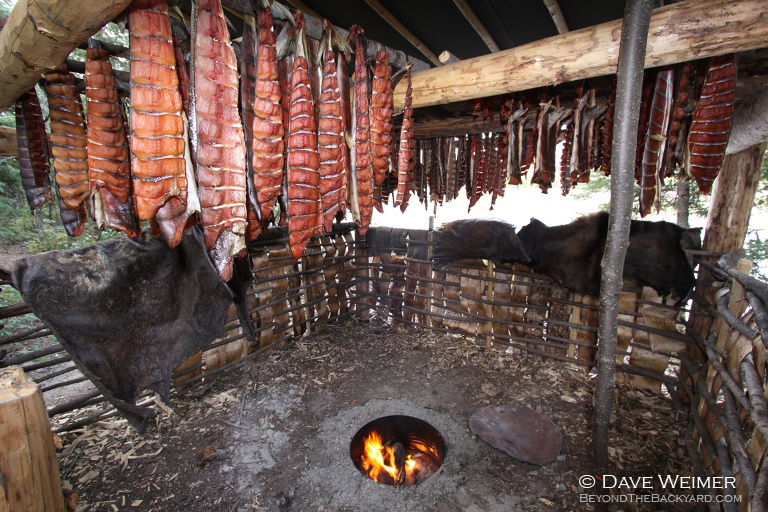 Hunting for small game is done with bow and arrow and I’m not talking about modern compound bows- I’m talking about whittling yourself some arrows out of birch. When I was there one of the guys (to respect his privacy we will call him ‘Gutshot’) was able to kill two spruce grouse which made for a fine stew that night.

When living primitively one of the questions you will eventually ask is, “How far ‘primitive’ are we going to go here?”  A highly skilled primitivist will eventually find life a little too easy and thus feel the need to push their limits a little further.  One of the ultimate tests is trying to subsist in a ‘future-primitive’ or ‘post-apocalyptic’ scenario. Meaning you wouldn’t have fuel, guns, or mechanical trappings but you’d have access to metal objects that you’ve scavenged and fashioned yourself- such as knives, axes, and arrowheads. 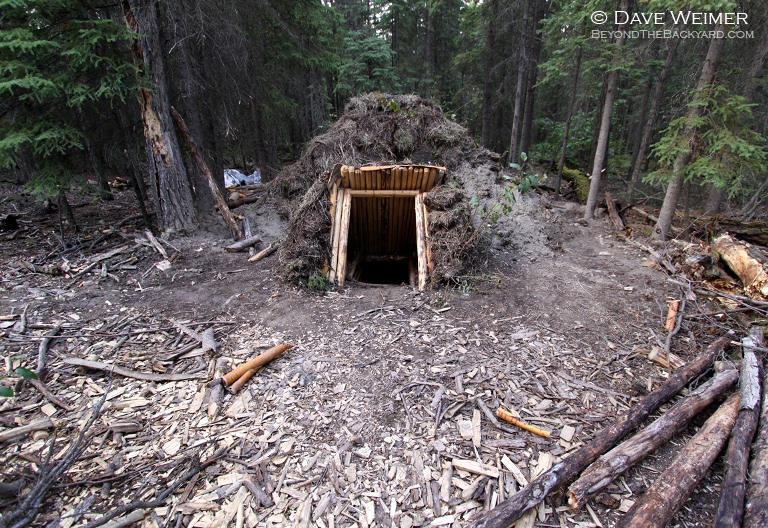 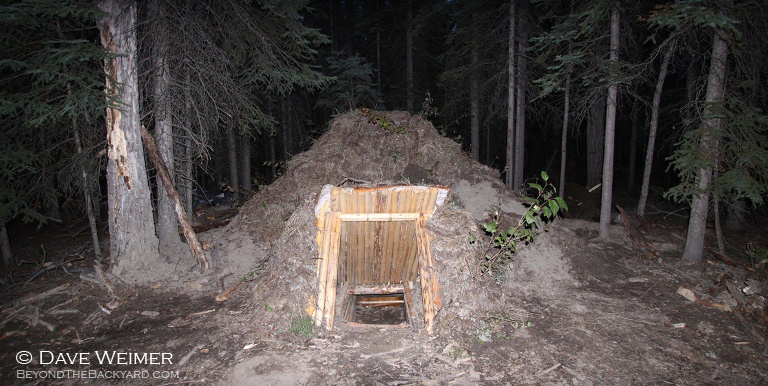 Above: View from inside the sod igloo. Gutshot on the left. Smoke naturally filters out through the hole in the roof. There is a fresh air vent underneath the hearth.

Below: An old sod igloo we found near the confluence of the Kobuk and Pah Rivers. You don’t see these old ones around much anymore, nature quicky consumes them. Iditarod musher Ed Iten lived in a sod igloo near Pah River in the 70’s. This could be his.

His vision is to live there for an entire year subsisting completely off the land. No matches, no guns, no food (other than what he’s hunted and gathered), and no help. Pretty hardcore. And from what I’ve seen, I think he can do it too. His cloths will be made himself from materials gathered. One of his ideas is to tan fish-skins and make a rainproof anorak (jacket).

Winter in interior Alaska with temperatures that plummet to -60F will test his mettle- he will need to successfully hunt big game such as moose or caribou (with bow and arrow) in order to pull off such an endeavor.  Gutshot plans to begin his year-long undertaking in the spring of 2013 and I am rooting for him.

I do hope that he breaks one of his self-imposed rules though, and brings a camera! 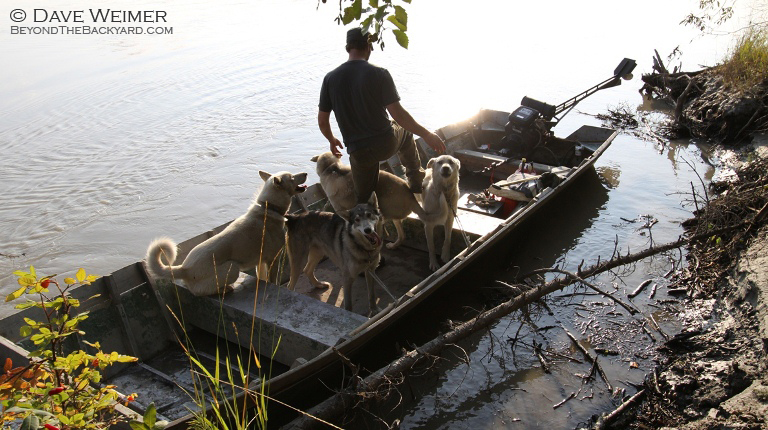 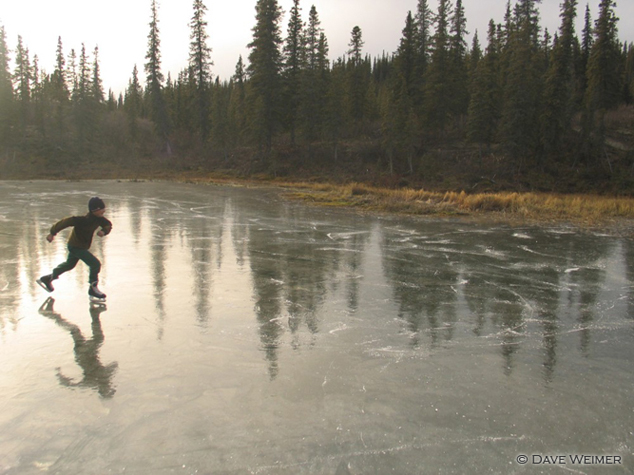